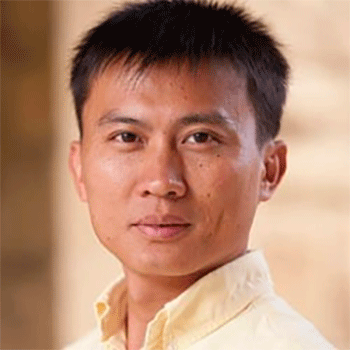 Yi Cui went to University of Science and Technology of China (USTC), where he received a Bachelor’s degree in Chemistry in 1998. He attended graduate school from 1998 to 2002 at Harvard University, where he worked under supervision of Professor Charles M. Lieber. His Ph.D thesis concerned semiconductor nanowires for nanotechnology including synthesis, nanoelectroncis and nanosensor applications. After that, he went on to work as a Miller Postdoctoral Fellow with Professor Paul Alivisatos at University of California, Berkeley. His postdoctoral work was mainly on electronics and assembly using colloidal nanocrystals. In 2005 he became an Assistant Professor in Department of Materials Science and Engineering at Stanford University. In 2010 he was promoted to an Associate Professor with tenure and named as David Filo and Jerry Yang Faculty Scholar. In 2010, he was promoted to be a Full Professor. In 2011, he started a joint appointment in Photon Science Faculty, SLAC National Accelerator Laboratory. His current research is on nanomaterials for energy storage, photovotalics, topological insulators, biology and environment.

He is a highly proliferate materials scientist and has published ~330 research papers, filed more than 40 patent applications and give ~300 plenary/keynote/invited talks. His works have generated a very large impact and he is among top most cited scientists in the world (Google Scholar, H-index 123). In 2014, he was ranked NO.1 in Materials Science by Thomson Reuters as “The World’s Most Influential Scientific Minds”. He is an Associate Editor of Nano Letters. He is a Co-Director of the Bay Area Photovoltaics Consortium and a Co-Director of Battery 500 Consortium. He founded Amprius Inc. in 2008, a company to commercialize the high-energy battery technology. Now the high-energy batteries invented by him have started to be used in commercial market, which could potentially revolutionize portable electronics and transportation applications. In 2015, he and Professor Steve Chu co-founded 4C Air Inc., to commercialize their invented breakthrough technology to remove particle pollutants from the air.